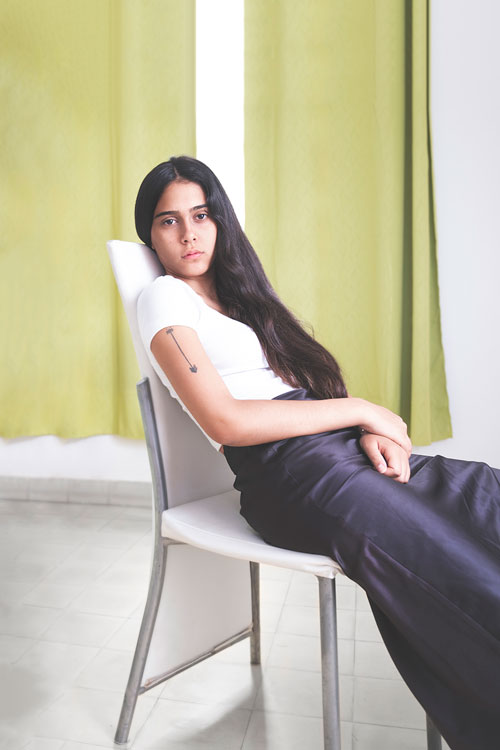 Alejandra Glez (Havana, 1996) lives and works in Havana. Her training as an artist-photographer includes Photography studies in collaboration with National Geographic in Havana, Cuba (2016) and the Havana’s School of Creative Photography Diploma (2016 - 2014).

Throughout her short but intensive career, she has participated in a large number of solo and group shows in Cuba and abroad and accumulated numerous awards. Amongst them we shall mention the latest ones: the Special participation in the Biennial of Women, with the exhibition ‘Is being a woman a crime?’, Aurora Vigil-Escalera Gallery, Gijón, Spain (2020); the Special Prize in the Arte Laguna Prize, Giardini dell’Arsenale, Venice, Italy (2020); and the IV ENAIRE Foundation Young Photography Award, which this year’s will be part of PhotoEspaña (2021).

Significant Achievements
Biennial of Women
Special participation in the Biennial of Women, with the exhibition ‘Is being a woman a crime?’, Aurora Vigil-Escalera Gallery, Gijón, Spain
Arte Laguna Prize
Special Prize in the Arte Laguna Prize, Giardini dell’Arsenale, Venice, Italy (2020)
Young Photography Award
IV ENAIRE Foundation Young Photography Award, which this year’s will be part of PhotoEspaña 2021.
Explosive breasts
Curated by Luisa Ausenda
‘Explosive breasts’ stands as a visual synthesis of Glez’s main artistic concerns
Titled after one of the featured works, ‘Explosive breasts’, this drop stands as a visual synthesis of Alejandra Glez’s main artistic concerns. On the one hand, it showcases her ironical yet deeply feminist point of view with the video animation featuring female breasts of different shapes and colors flying like balloons and then exploding in the air, squirting milk and covering the camera as if they were made of plasticine. On the other, through the limited editions of ‘Absence’ and ‘Presence’ and the video ‘Absence-Presence’, it reflects on the uncomfortable truth of how most of the violence against women goes unpunished. Last, with the work ‘Body and space limits’, this drop portrays Glez’s fascination with architecture and the repetition of gestures and body motions in the space.
MULTIPLE EDITION﻿S
Body and Space Limits
2020, 00:30 min, 37.4 MB MP4
Edition of 2
$
600
$
SINGLE EDITION
Explosive Breasts
2020, 00:17 min, 39.7 MB MP4
Single Edition
$
1500
$
AUCTION
Absence - Presence
2021, 00:23 min, 30MB MP4
More about the artist:
alejandraglez.com
instagram.com/alejandraglezvisual_artist

Please note that due to technical delays between crypto and USD purchases there could be a double purchase of a single artwork.

We will notify you immediately and refund you a full amount if such a situation occurs.